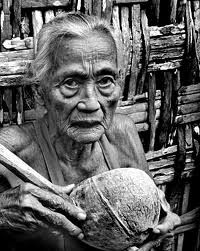 There was once a story of Ni Daha Tua.

There was once told in some village there was an old single lady, named Ni Daha Tua. She was very old and lived by herself in a small hut. She scavenged firewood in the woods. She diligently scavenged firewood and returned home on evening and sold them on the next day. She could only sell the firewood once in two days. Although that, she had her meals cooked for herself, sometimes she had leftovers because she did not eat so much. Ni Daha Tua had a neighbor, named Pan Rendah. Because he as so many children, Pan Rendah scavenged firewood along with Ni Daha Tua every day. Since he was a healthy man and younger than Ni Daha Tua, he could scavenge more firewood home and sold it every day. Although that, because he fed many mouth, he often left with not enough meal. Ni Daha Tua came to envy Pan Rendah, because he could carry more firewood and sold it every day. In the evening, Ni Daha Tua returned from scavenging firewood and sat down on her balcony as she muttered, “The God is unfair upon giving us blessing. Pan Rendah could sell firewood more and gain more money, while I can only sell it once in two days and gain less money than him. I wish if I was a young healthy man, it would be great.” As she was done muttereing by herself, a woman came to her and told Ni Daha Tua, “Miss Daha Tua, do not you mutter by yourself, saying the God gave unequal blessing, while everyone is as equal as other before the God. If you want to be a young healthy man, then it shall be granted.” that’s what that elderly woman said, and vanished. By the time it is granted, Miss Daha Tua became a young fine gentleman, then he was very happy. Since he is now a healthy young man, it meant he was able to bring firewood back, and sold it almost daily, until he had enough money, then he proposed a woman as wife. Long story short, he was getting married, he had so many children, until it became too difficult to raises them, as the money from selling firewood were not enough to feed them all. When he was going to sell firewood at market, and made money on it, he then left. There he stared onto the merchant which sold many things. His envious thought grew, and he went back home. Upon arrival, he again was grumbling with himself. “Sigh, God is unfair upon giving us blessing. The merchant, as a woman, sells things and gets so much money. I am alone carrying firewood until I hurt my neck. If I become a merchant, it would be great.” He grumbled to himself. Again, the old woman from before came and said, “In the past I told to not muttering something so ungrateful, talking that God is unfair, now you said something so ungrateful again. Well, if you wish to be a merchant, then your wish shall be granted.” Said the old woman, then she vanished again. Long story short, she became a rich merchant who lived without missing or lacking anything. One day, when the merchant was selling, there was an Arch Bishop of the land, marched toward the palace to pay a visit. Seen by the merchant enviously, she then murmuring again said “Sigh, my wish is always not enough. I am so rich now, but have no follower. If I am an Arch Bishop, I will be happy with so much money and so many followers.” As she finished murmuring, the old woman from before appeared. “Very Well, merchant, your wish shall be granted.” Said the old woman, and then she vanished like before. At that exact time, the merchant was appointed on palace, given name of The Arch Bishop, bestowed many loyal followers. As he became The Arch Bishop, yet he still felt not satisfied, because there was still someone above him. And there, he made another wish to The God to become a king, and had his wish granted. At the same time The King felt ill, and died. Later The Arch Bishop took the throne and became The King. As he took the throne, he still felt envious, because he is not the only king on the land. There were many other kings, he then made a wish to The God, “Oh Lord Sanghiang Widi, if you really love me, bestow me another blessing, grant my wish. About what I wish is to defeat all kings so that I will rule over this realm from the sky to the earth. You had too much world to rule, so just rule the heaven!” There The King was ordering all of his troops, ready to attack the other kings. The troops had been gathered and then The King marched to the war, and ordered his troops to plunder every village. Long story short, so many rulers had fallen to The King, only one still stood against him. At the night after the war break. When The King was at his chamber, before he went to sleep, the old woman from before came to him and said, “You ignorant King, all of your wishes had been granted by The God, but your wish that makes you become the only ruler in this realm, from the sky to the earth, shall not be granted, as ignorant and as envious as you are!” that’s what she said, as she vanished again.

As that old woman left, a rain was heavily poured followed by striking thunder storm, the a thunder struck the chamber and burnt it, including The King burnt to death. And that was a story of an ignorant person full of envy. -translation'19 unud

—
Nothing was added yet.