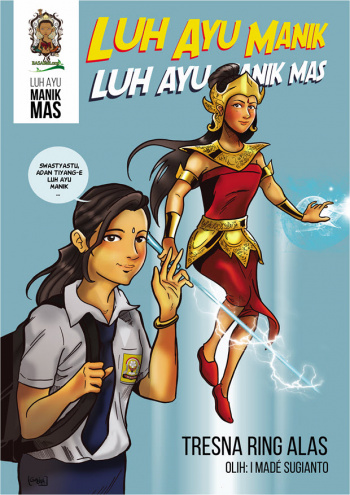 Video by: I Nengah Mawa


The theme of the story suits the current ongoing environmental issue. In the beginning of the story, it was explained that terrible things would happen if people keep felling the trees in the forest. Love the environment movement must be started from early age. Using Luh Ayu Manik and her friends as the good characters who had big concern on the forest felling and later gathered together to plant trees in the forest will give the young readers of the book an inspiration which hopefully will encourage them to pay more attention and take good care of the environment, in this case, the forest.

To make it more interesting, the author of the book included 2 demon characters from the Balinese mythology, rangda dan celuluk, which masks were used by 2 of Luh Ayu Manik’s friends to scare away the thieves who felled the trees in the forest.

The main character Luh Ayu Manik, who could chance her appearance to a beautiful woman with super natural power and who fought against the thieves, was meant to attract the children’s attention who read the book about a super hero who saved her friends from the bad people.
This story is very good because it tells about the positive action that can be done by teenagers in preserving the forest. It reminds us to care about plants, trees, and do something for our environments.
Luh Ayu Manik Mas

The story is really great. It thought people, especially the young generation to aware of their environment. Do efforts to keep them sustainable. The writer has been successful to tell the cause and effect of cutting the forest.

Nothing was added yet.