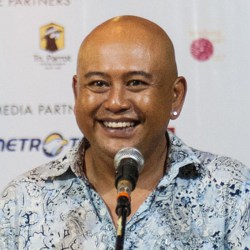 I Wayan Juniarta's primary profession is as a journalist who finds solace in crafting essays following his tragically failed attempt at writing poetry. His first Bungklang-Bungkling records the hilarity and ludicrousness of Balinese men. When he’s not writing essays, Jun can be found pedaling towards the island’s most serene spots while composing bite-size koans, which you can seek out using the hashtag #cyclingwithbuddha. 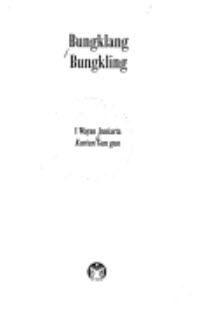 “Recently thousands of hairy caterpillars have “attacked” villages. What does it mean?” comes a question. It means that the they “never go to a barber or beauty salon”. If they do, their “hairy” styles would be different; curly, bald, short hair, and re-bonding as well,” replies I Putu Tawah Matah (Just Talk Without Thinking).

Everyone laughs. They realize that that kind of comment always comes when a question is asked to crazy people like I Putu.

“It’s a sign for us. Perhaps we should carry out bigger rituals, or we might have done something wrong that make the gods angry,” comments I Made Tirtayatra Miratdana (Pilgrimage Funded By ‘Dirty’ Money).

Everyone seems to know everything about the gods’ minds: when there is a volcanic eruption, or a tsunami, or a caterpillar plague, they say the gods are angry. They think that the gods have no other job other than creating disasters.

“The way you think is similar to the Legislative Assembly members who say the caterpillar epidemic is a “warning” from God. If God likes creating disasters, the first target should have been them as they never listen to the people. They keep wanting to build a new huge hotel-like office for themselves when most of Indonesian are still living in poverty,” says I Wayan Bungut Lengut (Sweet Talk).

“If the gods created natural disasters — volcanic eruptions, earthquakes, rabies or caterpillar epidemics — every time they got angry, what would they do when they were happy? Distribute gold, money, rice or Supermi noodles?”

“As to date we have never seen things like that, it means that we still have to work hard to survive, or you have to buy your own supermi if you want. The conclusion is the gods have nothing to do with natural disasters,” concludes I Wayan.

Everyone nods. They don’t like people who say the gods are often angry or create natural disasters. “Our gods (bhetara) are easy, they do not like swearing at their followers: when a river delta in Kuta was claimed and filled in by an investor, or when a temple’s property is rented out for villas, or when temples are changed to tourist attractions, or when ceremonies and rituals become business-oriented ……….. our gods never complain”

It seems our gods know well that humans are smart and know what they are doing.

“We are born to think: that’s why we have to use our brains, and not always blame our gods every time we have a problem or a disaster. Otherwise, it’s no use the gods giving us brain.”

“So hairy caterpillar epidemic has nothing to do with the gods.”

“I would think that this epidemic has been caused by extinction of birds and ants (less and less predators that prey on hairy caterpillars). Or the hairy caterpillar might not be aware of “family planning”; and as it has been raining recently, they breed very fast,” says I Wayan. Were the caterpillars be human, they would know KB (Family Planning program), and how expensive education and health insurance is, there were bills to pay, hence they would think twice before breeding; knowing how expensive life is.

“Well, no matter how bad the hairy caterpillar epidemic is, don’t they know that caterpillars will turn into beautiful butterflies or produce expensive silk.

“No matter how destructive the caterpillars are, they are much better than bad people. Bad people never turn into good ones or produce good things. Instead, they just turn into a bunch of hypocrites who they pretend to know everything about the gods or act in the name of the gods.