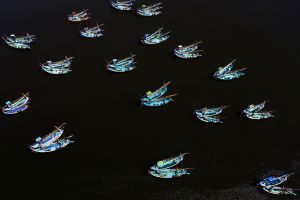 After the incident, the stakeholders visited Danghyang Dwijendara. He begged that the temple be restored. Well, the request was granted, so that the collapsed temple then stood up again as before. The incident was later enshrined in the name of the temple. In Balinese, encak means collapsing or breaking. Then the temple is named Pura Gede Perancak.

Well, behind this myth, this temple has become an alternative tourist spot for you to visit, because you can learn about Balinese traditions and culture here. Not only that, there is a large lake planted with mangrove trees behind the temple. There are several jukung (boat) that are ready to take you along the lake while enjoying the fresh air around.