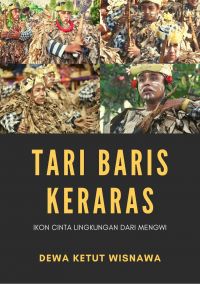 In the days of the Mengwi kingdom in the eighteenth century, the embankment of the Taman Ayun lake once burst. Villagers flocked to repair the embankment. However, no matter how hard they made the support, the embankment always collapsed. Because the embankment was always damaged, the community could not get enough water to irrigate the fields. To solve this problem, the king of Mengwi went to Mount Mangu to meditate. In his meditation, he saw a figure dressed in dried banana leaves. The figure told him to make a special ceremony on the embankment of Taman Ayun. The king then did as the figure commanded. After the ceremony was carried out, the embankment of Taman Ayun never broke again. Until now, that history is remembered by the people of Mengwi in a wali dance (sacred dance) called Baris Keraras. This unique dance apparently not only characterizes the supernatural beings seen by the king of Mengwi, but also serves as a reminder to everyone that the natural surroundings should be protected so that humans can live in prosperity.