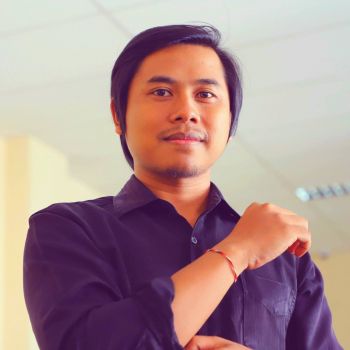 Putu Eka Guna Yasa was born on January 6, 1990 in Banjar Selat Tengah, Susut, Bangli. Completed his undergraduate education at the Balinese Literature Study Program, the Faculty of Cultural Sciences, Udayana University in 2012 and a master's degree in the Linguistics Masters Program with Pure Linguistic Concentration, Faculty of Cultural Sciences, Udayana University in 2017. He also attended the International Intensive Course in Old Javanese organized by the National Library in 2018 and 2019. Since 2013 he has worked as a staff at the Center for Lontar Studies at Udayana University. Actively writes articles in various media such as Bali Post, Post Bali, and Tribun Bali both in Balinese and Indonesian. A number of his articles were published in Prabhajnyana Book: The Study of Lontar Literature such as (1) The Meeting of Natural Beauty and the Beauty of Language in Kidung Dampati Lelangon; (2) Water Image in Ancient Javanese and Balinese Literary Library Temples; (3) Kidung Bhuwana Wisana: Aesthetic Heritage by Ida Padanda Ngurah; and (4) Sarira Devotees and Explorers. Gedong Kirtya published books about the world of Balinese literacy, including the Brata Term Dictionary in the Bali Lontar Library and the Synonym Dictionary in the Dasa Nama Lontar. Putu Eka Guna Yasa received an award as a Literacy Activist Youth from the Bali Language Center in 2018. Since that year, he has been appointed as a lecturer at the Balinese Literature Study Program, Faculty of Cultural Sciences, Unud. Since 2020 as executive director at the BASAbali Wiki foundation.

Scholars Room IGB Sugriwa's Model of Translation in Kakawin Rāmatantra: The Effort to Continue the Springs Of Literature to Various Eras 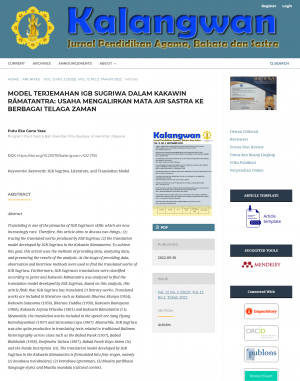