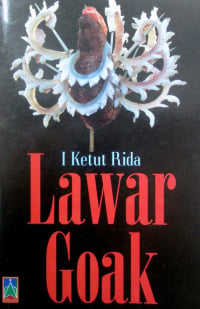 Short stories in the Balinese language. If you want to find a Balinese story that is truly Balinese, this collection of short stories in Balinese language Lawar Goak by I Ketutu Rida is worth reading. The Balinese Lawar Goak is not only reflected in the language used but also in the thematic choice of the story which is very Balinese. I Ketut Rida is indeed known as a modern Balinese author with his main strength in the Balinese language used. Ketutu Rida's Balinese language does not only come from a standard variety so that it can be understood by Balinese speakers in general, the choice of words and metaphors is also simple. For his work he chooses the general, medial language variety, not the high caste variety. That is why, the egalitarian atmosphere is very much felt in Ketut Rida's short stories. The themes of Ketut Rida's story are also very simple and feel almost without conflict. Ketut Rida's short stories seem to represent the Balinese world, wrapped with thick moral messages. This seems to be due to Ketut Rida's background as a teacher and has served as a traditional elder in his village, Sulang, Klungkung. Ketut Rida's way of speaking is also very distinctive like the performance of the traditional Balinese drama, arja. Beginning with a picture of the natural atmosphere about. After that, Ketut Rida slowly explained the problems of the story. It's also so slow that it can feel tedious. In fact, therein lies the strength of a Ketut Rida. The stories in this book are truly Balinese stories. Readers who have been complaining that they feel that modern Balinese literature lately is nothing more than modern Indonesian literature using Balinese as a medium will be able to cure their longing in this book. Therefore, it is not wrong if the curatorial team of Widya Pataka named I Ketut Rida's book as the recipient of the award for 2014. Widya Pataka is an annual award given by the Bali Provincial Government through the Bali Provincial Library and Archives Agency. [Ketut Jagra]